When veterans of World War II returned home to McMinn County, Tennessee, they probably weren't surprised to find that many of the same politicians from before the war were still running the place. A local political machine run by Paul Cantrell had been suspected of running the county and committing election fraud since 1936.

However, when the sheriff's deputies began targeting the veterans with fines for minor arrests, the vets suspected they were being taken advantage of. One veteran, Bill White, later told American Heritage magazine:

"There were several beer joints and honky-tonks around Athens; we were pretty wild; we started having trouble with the law enforcement at that time because they started making a habit of picking up GIs and fining them heavily for most anything—they were kind of making a racket out of it.

"After long hard years of service—most of us were hard-core veterans of World War II—we were used to drinking our liquor and our beer without being molested. When these things happened, the GIs got madder—the more GIs they arrested, the more they beat up, the madder we got …"

By early 1946, the vets and the townspeople were tired of what they saw as corrupt practices by Paul Cantrell and his lackeys. The vets started their own political party with candidates for five offices. The focus of the contest was the race for sheriff between Paul Cantrell and Henry Knox, a veteran of North Africa.

Everyone knew that the election could turn violent. Veterans in nearby Blount County promised 450 men who could assist in any need that McMinn County had on election day. In response, Cantrell hired two hundred "deputies" from outside the county to guard polling places.

What happened next would go down as the "Battle of Athens," or the "McMinn County War." 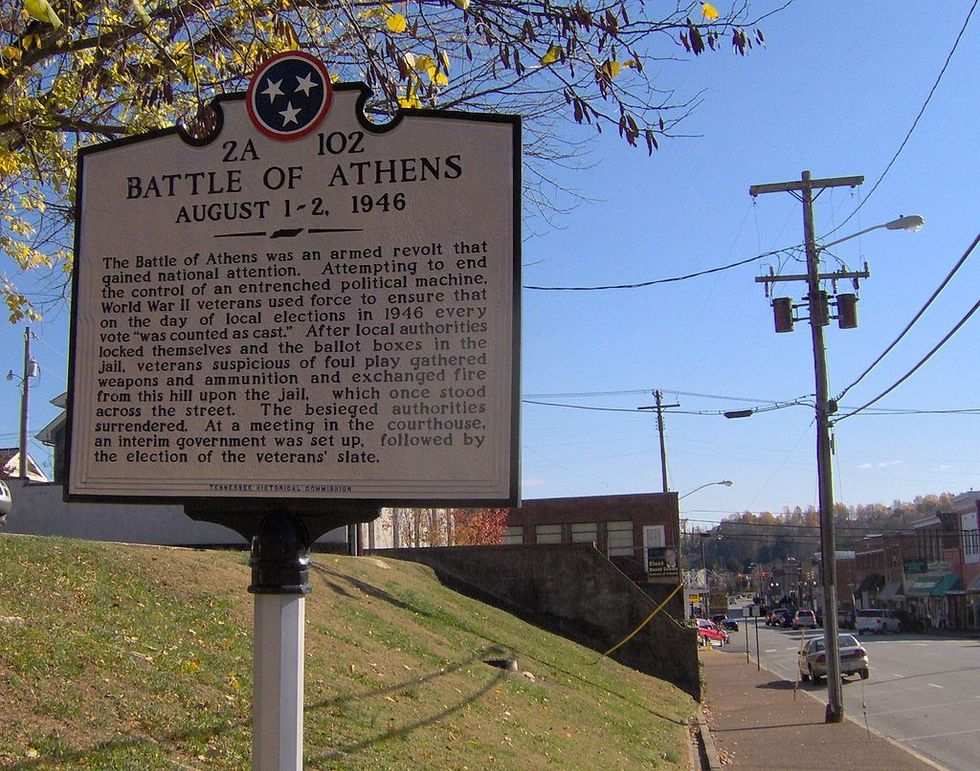 Tensions built on election day as the veterans faced off with the special deputies. By 3 p.m., an hour before the polls closed, violence broke out. Deputies beat and shot a black farmer who tried to vote and arrested two veterans who were then held hostage in the Athens Water Works. Other veterans responded by taking hostage deputies who were sent to arrest them. Still, Cantrell was able to fill most of the ballot boxes with purchased votes and get them to the jail, ensuring he would win the election.

While the sheriff and his lackeys counted the votes in the jail, White and the other veterans were getting angry. Finally, sometime after 6 p.m., White led a raid on the National Guard armory to get guns.

White said in a 1969 interview that they "broke down the armory doors and took all the rifles, two Thompson sub-machine guns, and all the ammunition we could carry, loaded it up in the two-ton truck and went back to GI headquarters and passed out seventy high-powered rifles and two bandoleers of ammunition with each one."

The veterans set siege to the jail, firing on deputies that were outside the jail when they arrived. One deputy fell wounded into the building while another crawled under a car after he was hit in his leg. But, Cantrell and others were safely locked behind the brick walls of the jail. The veterans needed to get through before other police or the National Guard arrived.

Molotov cocktails proved ineffective but at 2:30 in the morning, someone arrived with dynamite. At about the same time, an ambulance arrived and the veterans let it through, assuming it was there for the wounded. Instead, Paul Cantrell and one of his men escaped in it.

A few minutes later, the vets started throwing dynamite. The first bundle was used to blow up a deputy's cruiser, flipping it over. Then, three more bundles were thrown. One landed on the porch roof, one under another car, and one against the jail wall. The nearly simultaneous explosions destroyed the wall and car and threw the jail porch off of its foundation.

The deputies in the jail, as well as some hiding out in the courthouse, surrendered immediately. The veterans were then forced to protect the deputies as local townspeople attempted to kill them. At least one deputy had his throat slit and another of Cantrell's men was shot in the jaw.

The veterans established a patrol to keep the peace. To prevent a counterattack by Cantrell, the vets placed machine guns at all the approaches to Athens, where the jail and courthouse were located.

The rest of the incident played out without violence. Henry Knox took over as sheriff Aug. 4, 1946 and future elections dismantled what was left of Cantrell's machine.