For 20th Anniversary of 9/11, Biden Repeats Hanoi and Gifts Kabul to the Taliban

Taliban insurgents entered the Afghanistan capital Kabul on Sunday and an official said President Ashraf Ghani had left the city for Tajikistan, capping the militants’ lightning push for power.

A representative of the Taliban said the group was checking on Ghani’s whereabouts. Some local social media users branded him a “coward” for leaving them in chaos.

Taliban fighters entered the presidential palace and took control of it, two senior Taliban commanders in Kabul said. The Afghan government did not confirm this.

American diplomats were evacuated from their embassy by chopper after a swift advance by the insurgents.

Taliban fighters were reaching the capital “from all sides”, a senior Afghan interior ministry official said and there were some reports of sporadic gunfire around the city. The group’s spokesman Zabihullah Mujahid said they were waiting on the outskirts and were in talks with the Western-backed government for a peaceful surrender.

“Taliban fighters are to be on standby on all entrances of Kabul until a peaceful and satisfactory transfer of power is agreed,” he said in a statement.

“No one’s life, property and dignity will be harmed and the lives of the citizens of Kabul will not be at risk.”

Known during their past rule for keeping girls out of school and their hardline practice of Islamic law, including punishments of amputation, stoning and hanging, the Taliban appear to be trying to project a more modern face.

Another spokesman Suhail Shaheen said the group would protect the rights of women, as well as freedoms for media workers and diplomats.

“We assure the people, particularly in the city of Kabul, that their properties, their lives are safe,” Shaheen told the BBC, saying a transfer of power was expected in days.

Before news that Ghani had left Kabul, a palace official said he was in emergency talks with US peace envoy Zalmay Khalilzad and Nato officials.

Power would be handed over to a transitional administration, the government’s acting interior minister, Abdul Sattar Mirzakawal, said in a tweet on the Tolo news channel. “There won’t be an attack on the city, it is agreed that there will be a peaceful handover,” he said.

“Some people have left their keys in the car and have started walking to the airport,” one resident said by phone.

US officials said diplomats were being ferried by helicopters to the airport from its embassy in the fortified Wazir Akbar Khan district, while a Nato official said several European Union staff had moved to a safer location in Kabul.

US troops were still arriving at the airport, amid concern heavily armed Afghan security contractors could “mutiny” because they have not been assured Washington is committed to evacuating them, a person familiar with the issue said. Passengers walk to the departures terminal of the airport in Kabul. Photo: AP

The local US mission staff did not know where they should report for evacuation or how that would happen, the source said, adding they believed a small residual security force comprised mostly of third country nationals remained at the embassy.

US Secretary of State Antony Blinken said in Washington that the embassy was being moved to the airport deliberately and safely and has list of people to get out of harm’s way.

Despite the precipitous move, he rejected comparisons with the chaotic American departure from Saigon in 1975 as the Vietnam war drew to a close.

“This is not Saigon,” Blinken told ABC. “The fact of the matter is this: We went to Afghanistan 20 years ago with one mission in mind. That was to deal with the people that attacked us on 9/11. That mission has been successful.”

A Nato official said the alliance was helping to secure the airport and that a political solution to the conflict was “now more urgent than ever”.

Russia said it saw no need to evacuate its embassy for the time being.

British Prime Minister Boris Johnson said on Sunday nobody should bilaterally recognise the Taliban as the government of Afghanistan, adding it was clear that there would be a new administration in the country very shortly.

“We don’t want anybody bilaterally recognising the Taliban,” Johnson said in an interview clip.

“We want a united position amongst all the like-minded as far as we can get one.”

Earlier on Sunday, the insurgents captured the eastern city of Jalalabad without a fight, giving them control of one of the main highways into landlocked Afghanistan. They also took over the nearby Torkham border post with Pakistan, leaving Kabul airport the only way out of Afghanistan that is still in government hands.

The capture of Jalalabad followed the Taliban’s seizure of the northern city of Mazar-i-Sharif late on Saturday, also with little fighting.

“There are no clashes taking place right now in Jalalabad because the governor has surrendered to the Taliban,” a Jalalabad-based Afghan official said. “Allowing passage to the Taliban was the only way to save civilian lives.”

A video clip distributed by the Taliban showed people cheering and shout Allahu akbar (God is greatest), as a convoy of pickup trucks entered the city with fighters brandishing machine guns and the white Taliban flag.Iran said it had set up camps along the Afghan border to provide temporary refuge to Afghans fleeing their country.

Three diplomatic sources said Ali Ahmad Jalali, a US-based academic and former Afghan interior minister, could be named head of an interim administration in Kabul, though it was unclear whether the Taliban had agreed. In 2014, he was barred from running for president after refusing to give up his American citizenship.

After US-led forces withdrew the bulk of the their remaining troops in the last month, the Taliban campaign accelerated as the Afghan military’s defenses appeared to collapse.

President Joe Biden on Saturday authorized the deployment of 5,000 US troops to help evacuate citizens and ensure an “orderly and safe” drawdown of military personnel. A US defense official said that included 1,000 newly approved troops from the 82nd Airborne Division.

Taliban fighters entered Mazar-i-Sharif virtually unopposed as security forces escaped up the highway to Uzbekistan, about 80km to the north, provincial officials said. Unverified video on social media showed Afghan army vehicles and men in uniforms crowding the iron bridge between the Afghan town of Hairatan and Uzbekistan. 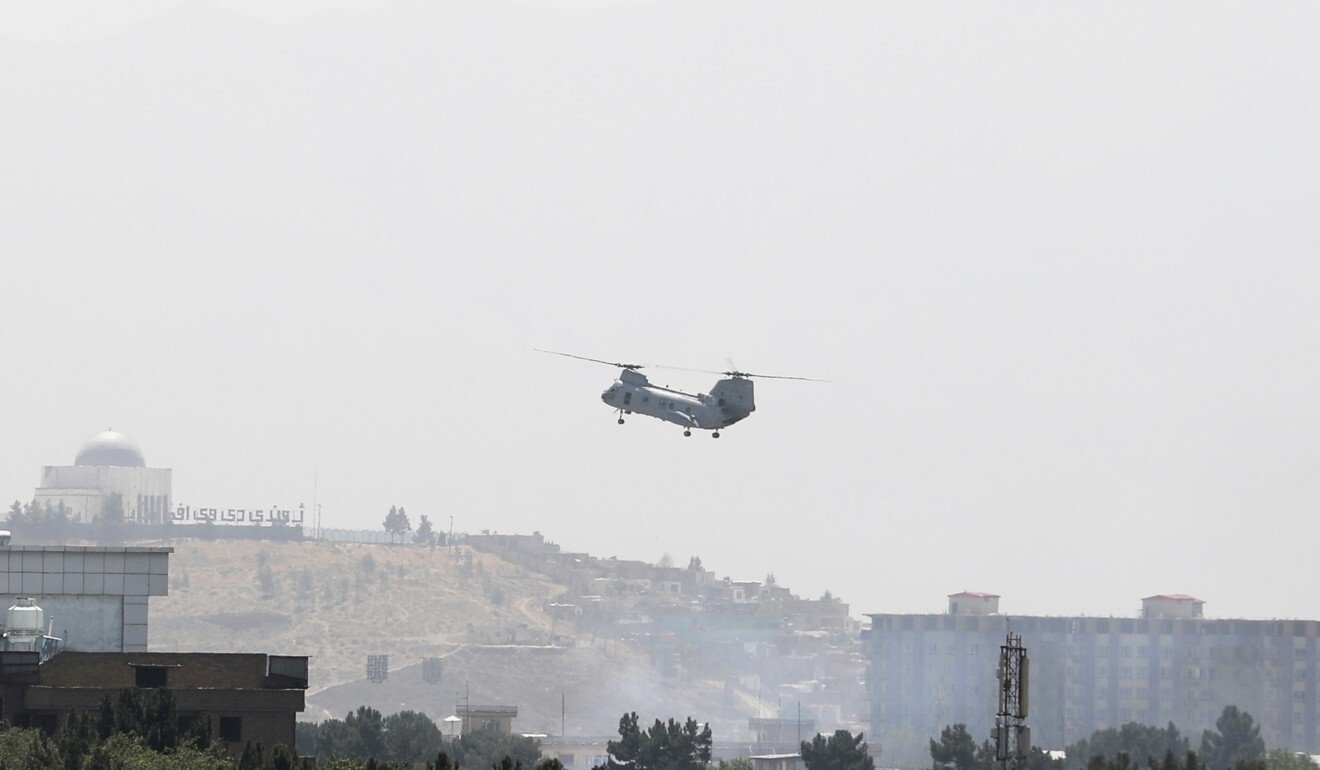 A US Chinook helicopter flies over Kabul. Photo: AP

Two influential militia leaders supporting the government – Atta Mohammad Noor and Abdul Rashid Dostum – also fled. Noor said on social media that the Taliban had been handed control of Balkh province, where Mazar-i-Sharif is located, due to a “conspiracy.”

In a statement late on Saturday, the Taliban said its rapid gains showed it was popularly accepted by the Afghan people and reassured both Afghans and foreigners that they would be safe.

The Islamic Emirate, as the Taliban calls itself, “will, as always, protect their life, property and honour, and create a peaceful and secure environment for its beloved nation,” it said, adding that diplomats and aid workers would also face no problems.

Afghans have fled the provinces to enter Kabul in recent days, fearing a return to hardline Islamist rule.

Early on Sunday, refugees from Taliban-controlled provinces were seen unloading belongings from taxis and families stood outside embassy gates, while the city’s downtown was packed with people stocking up on supplies.

Hundreds of people slept huddled in tents or in the open in the city, by roadsides or in car parks, a resident said on Saturday night. “You can see the fear in their faces,” he said.

Pope Francis called on Sunday for dialogue to end the conflict in Afghanistan so that its people can live in peace, security and reciprocal respect.

“I join in the unanimous worry about the situation in Afghanistan. I ask you to pray along with me to the God of peace so that the din of weapons ends and that solutions can be found around a table of dialogue,” he said to pilgrims and tourists in St. Peter’s Square. 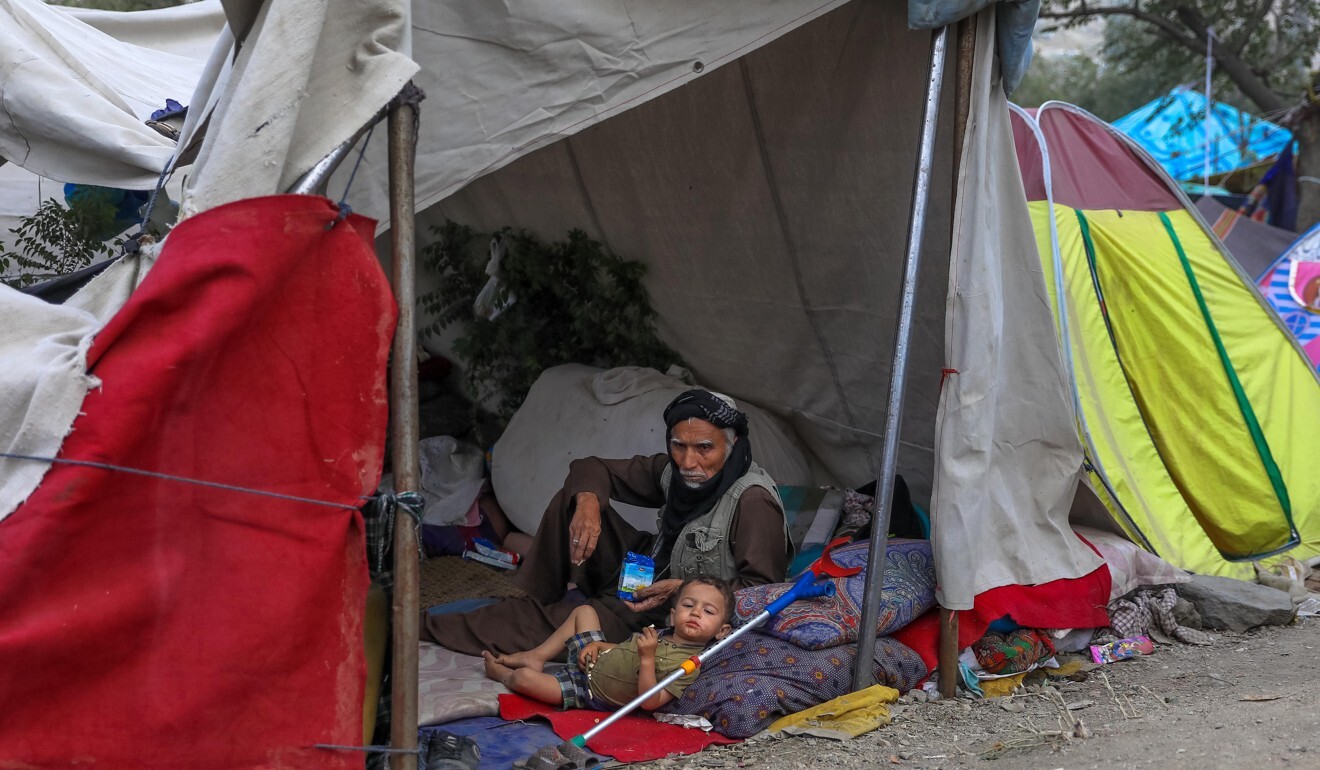 Biden said his administration had told Taliban officials in talks in Qatar that any action that put US personnel at risk “will be met with a swift and strong US military response.”

He has faced rising domestic criticism as the Taliban have taken city after city far more quickly than predicted. The president has stuck to a plan, initiated by his Republican predecessor, Donald Trump, to end the US military mission in Afghanistan by August 31.

Biden said it is up to the Afghan military to hold its own territory. “An endless American presence in the middle of another country’s civil conflict was not acceptable to me,” Biden said on Saturday.